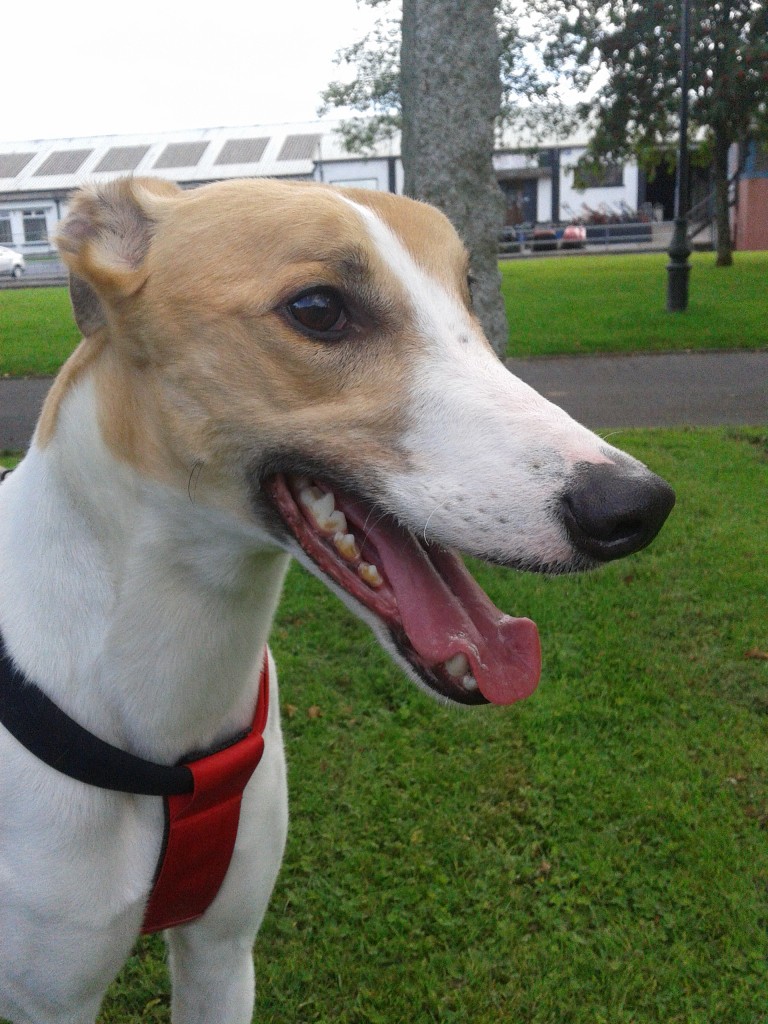 As we don’t like to go more than a few hours around here without at least one foster greyhound, on my way home from dropping off Casper to go to his new home in the UK, I picked up a strapping young lad from a trainer in Tuam, Co Galway. I named him Fionn, after the legendary Irish giant Fionn Mac Cumhaill (read about him here) as he was so generously proportioned none of my existing martingale collars would fit over his head! A tall boy, but also considerably more solidly built than most racing greys, he weighed in at 35 kg and often seemed more like a small pony than a dog! With somewhat unusual fawn and white markings, he was strikingly handsome, bearing a resemblance to a long-legged, overgrown Jack Russell terrier. 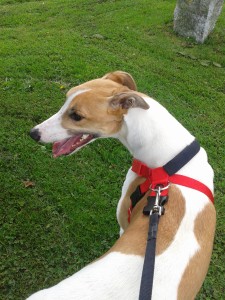 Fionn was an exceptionally friendly, well-adjusted boy who greeted everyone with a wagging tail and big smile. He was apparently a very fast dog during time trials at the racetrack, but he didn’t like overtaking the other dogs, far too polite for that! At just two years old, he was still puppy-like and playful, absolutely ecstatic every time the leash came out for a walk.  The only downside to his playful nature is when it came to interacting with the cats. While he was not aggressive with them, he did think they were great fun to play with and although Sweet Pea would gladly play along, his excitement would increase to the point where it could get a bit dangerous due to the size difference between them. 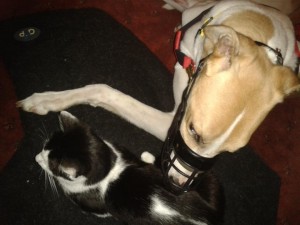 After a few weeks of training and exposure, his behaviour around the cats improved, although not to the point where I felt confident recommending him for adoption in a cat household. I wouldn’t say that he can never live with cats, he still has potential, but he requires a bit more maturity, consistent training and supervision before being a good fit with a feline family member. As my seventh foster dog and only the first to not be suited for a cat home (at this point) I am consistently impressed at how greyhounds can defeat all expectations to the contrary to become well adjusted companions for cats if given a bit of guidance and boundaries at the start.

Fionn has headed off to a new home in Wales with one of HUG’s rescue partners and will make an absolutely fantastic addition to any family with his cheeky attitude and outgoing nature. Miss you lots, my giant monkey boy!