The best cats aren’t planned. They simply arrive and wait while you adjust your life around them. 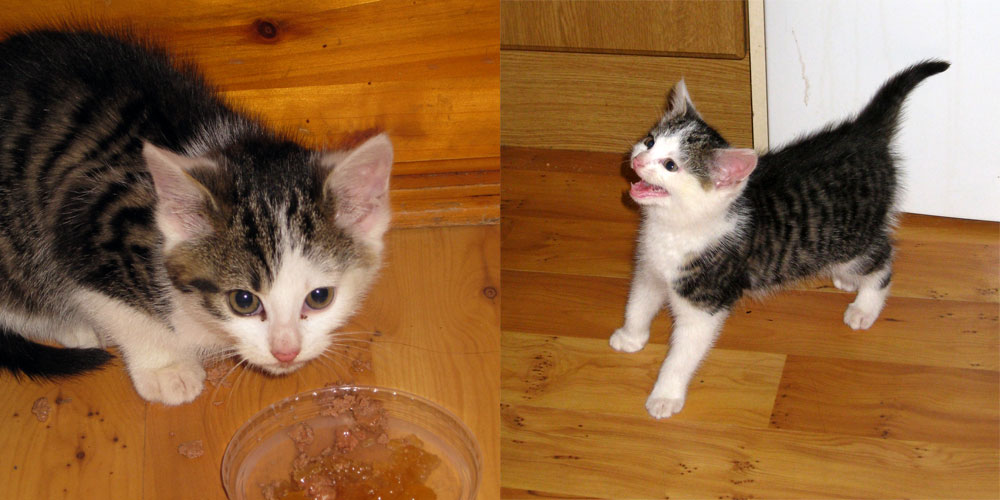 Day 1: Small, hungry and opinionated, not much has changed since then!

Such was the case with certain outspoken tabby and white kitten. But back to where it all began…

It was a cold, dark and wintry night. And by that I mean it was really, really feicing cold by Irish standards (-15 with a few weeks of snow). From within my chilly flat I heard a crying noise coming from the alley next door, so I went outside to investigate. I found a cold, hungry kitten meowing plaintively with impressive volume, but darting away from anyone who approached. Soon she was hiding behind a locked gate, still crying, but not daring to come out. Armed with a bit of ham from the fridge, I coaxed her close enough to the gap in the fence to pull her through and stuff her into my jacket. Upon inspection inside, she appeared to be about 8 weeks old, and not accustomed to living outdoors, so the temperature that night could have had dire consequences. After an emergency run to the shop for a few essential supplies, she eagerly ate any food I gave her and used a makeshift litterbox out of an old fry pan! She soon became known as Penny Lane, in reference to the alley where she was found, and wasted no time laying claim to her new territory, climbing every surface in the flat, especially my legs and favouring a laptop keyboard over her cat bed.